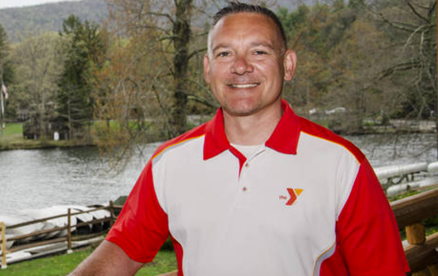 “I like being in the outdoors. I’ve also created a lot of personal memories here,” he said.

Koch is already a familiar face around camp and in the Y community. He has been senior director at Fairview Lake since 2018, however, his career at “the lake” and the YMCA began long before that. He started out as a sleepaway camp counselor and worked his way up to senior positions at Fairview Lake and at other YMCA branches within the Metropolitan YMCA of the Oranges. He was named associate executive director of the Wayne YMCA when it became the sixth branch of the Metro YMCA in 2011.

He met his wife Carolyn when he was an environmental education instructor at Fairview Lake and she was a middle school science teacher who came to camp with her students. Koch said he knew from their first interaction that he wanted to marry her, and the two have three children: Marc, 15, Benjamin, 11, and Meike, 8. Carolyn is also the Blue Mountain Day Camp director at Fairview Lake.

His kids have grown up experiencing camp, and his oldest son worked in the dining hall kitchen this past summer. Many of Koch’s closest relationships are a result of camp.

Outside of the Metro YMCA, Koch spent three years as executive director at the Somerset Hills YMCA in Basking Ridge before rejoining the Fairview Lake team.

While summer camp director at Fairview, he expanded the Ranch Camp program from a small stable with 10-12 horses that offered only trail rides to a large stable with 32 horses. Campers now get the full experience of caring for their own horse, and receive riding instruction and horsemanship lessons in addition to trail rides.

Koch said he loves witnessing the many ways in which camp can impact a person. “By the time they leave here, you really feel like you’ve changed somebody’s life,” he said. “Maybe we taught a child to appreciate nature and the outdoors more, or we pushed someone beyond their boundaries and made them a little more resilient. Or we offered more peace during a time of life when they really needed it.”

Summer camp at Fairview Lake attracts about 1,000 children each summer, and about 8,500 guests attend weekend conferences annually. More than 13,000 schoolchildren a year take part in the environmental education program. Koch was recently preparing to welcome more than 300 new sixth-graders for a weekend of team building.

“Marc has been a valued member of the YMCA team for more than two decades,” said Richard K. Gorab, president and CEO of the Metropolitan YMCA of the Oranges. “His experience, depth of knowledge, and passion will help move Fairview Lake YMCA Camps forward and give more youth the opportunity to learn, grow and thrive.”

As executive director, Koch will have a more active role in fundraising and program development, and also improving the facilities at camp. He wants those improvements to include new cabins so that more people can experience camp and weekend retreats, and he wants to improve the quality of staff housing as well.

“Some of the major capital improvements such as making the dining hall new, fresh and vibrant, and building new cabins will take some time. Securing the dollars to make that happen is going to be my focus,” Koch said.

He also wants to keep alumni involved in celebrating camp’s history, and continue to develop the staff team so that they can be future leaders at the YMCA.

Most importantly, he wants Fairview Lake to continue to be a safe and welcoming place for all.

What he’s most proud of so far in his time at Fairview Lake is the campers and the impact camp has had on them. Three Metro YMCA board members were campers as children, Koch noted, and kids who he met as a counselor now register their children for camp. Also, alumni who received financial assistance to attend camp as kids now contribute to the annual fundraising campaign.

“I want people to consider Fairview Lake their second home and for a child or family to come back for many years, and I want their family members to come,” he said.

Questions to Ask in Your Summer Camp Search