The Metropolitan YMCA of the Oranges is giving youth from other countries a taste of American life and camp, while providing opportunities for local campers and YMCA members to learn about other cultures.

For some children, camp may be the first time they are spending significant time with people of different backgrounds, races and religions. These interactions help broaden kids’ world view and deepen their knowledge and understanding of other cultures and traditions.

“Our international counselors come to the U.S. using a J-1 Exchange Visa, which allows them to experience American culture and work in the U.S. for a limited period of time,” said Emily Rearer, marketing director at Fairview Lake YMCA Camps. “We use an agency to help place counselors here at camp, and they go through the same rigorous background checks and interviews that our American staff go through.”

The camp provides the counselors with cultural experiences like trips to New York City, the New Jersey State Fair and Sussex County Farm and Horse show, whitewater rafting, baseball games and waterparks, and the Fourth of July celebrations.

This summer, Fairview Lake also has campers from France and Spain. Almost all of the international campers come for three weeks or more of English language immersion and cultural exchange and they stay right in the cabins with American kids their own age, Rearer explained.

“Many of our international campers return year after year, and we have a few international counselors who were also campers,” Rearer said. “It's awesome to see the friendships that develop between all of our campers. Many American kids have never thought about traveling outside of the U.S., and they are inspired to go on exchanges themselves, or study abroad in college.”

The West Essex YMCA in Livingston has provided an American day camp experience to students from overseas, by hosting teens from China the last three years. Through this year’s Teen Adventure Camp, the teens learned about American law enforcement by visiting the Livingston Police Department, and about the banking system by visiting Columbia Bank. They also took a trip to ShopRite to hear from a nutritionist, and visited Inglemoor Rehabilitation and Care Center where they put on a show for senior residents. The students stayed at Caldwell University during their time here. 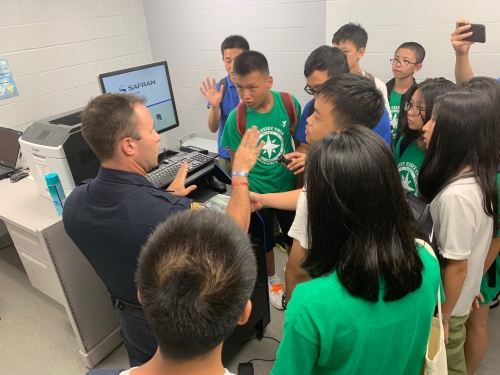 Teens from China visit the Livingston Police Department during a camp outing at the West Essex YMCA.

The Wayne YMCA hosted 10 high school students from Spain during six weeks this summer, through a partnership with Greenheart Exchange, a non-profit foreign exchange student organization. The teens stayed with local host families, and were able to use the library at the Wayne Y, where they received English language lessons from their Spanish chaperone.

The YMCA also enabled them to experience the Y as a member would, providing access to the facility’s pool, basketball courts, and other programs. During their visit, the students gave a presentation about life in Spain to YMCA campers, so that they were able to practice their English skills and also teach campers about their home country.

Having access to the Y was another way the teens could spend time together recreationally, said Laura Tiedge, executive director of the Wayne Y.

The Wayne Y has lent space for English language lessons before, including English as a Second Language instruction for Syrian refugees, but this was the first time they were approached to host exchange students, Tiedge explained.

“For Wayne, this diverse community is something we take a lot of pride in,” Tiedge said.

The Wayne Y also hosted 30 teens and their chaperones from the Y Seoul Youth Center in South Korea in July. The group, mostly middle and high school students, came to the U.S. to visit colleges and also see what a YMCA in the U.S. is like, said Bill Kanas, associate executive director at the Wayne Y. They spent about 90 minutes at the Y, where they took a tour of the facility and were able to ask questions, and engage in some physical activity.

The YMCA will mark Welcoming Week from Sept. 13-22. Welcoming Week is an initiative of Y-USA's national partner Welcoming America, which celebrates the growing movement of communities across the U.S. that fully embrace new Americans and their contributions to the social fabric of our country. During Welcoming Week, communities bring together immigrants and U.S.-born residents to promote cross-cultural understanding to raise awareness of the benefits of welcoming everyone. To learn more, contact your local branch.

Fairview Lake YMCA Camps is a branch of the Metropolitan YMCA of the Oranges. To learn more about summer camp programs at Fairview Lake, visit fairviewlakeymca.org, or to inquire about opportunities for cultural exchanges at your local YMCA branch, visit metroymcas.org.

0 comments on "Summer experiences at the YMCA Bridge Cultures"