A new small animal farm has been teaching campers how to care for other living things, in addition to providing companions for kids who might need a little extra help in adjusting to camp life.

The farm initially began with a Lionhead rabbit named Thumper a few years back. A camp employee gave Thumper to Fairview Lake YMCA Camps Associate Executive Director Jennie Griffin, and Thumper would accompany Griffin to camp. That summer, staff began to notice that a certain few kids of different ages would visit the bunny regularly to pet and walk it. Griffin believes the rabbit was an avenue for those three campers to open up about abuse they faced in their lives.

For many kids, talking to an animal can be a means of sharing their private thoughts and secrets, experts say.

The farm, which has expanded to include two rabbits, two goats, two donkeys, a sheep and several chickens, has evolved into a place where campers feel comfortable, and are comforted by taking care of something else, Griffin said.

Interacting with animals can help relieve any stress or anxiety children may feel about camp, especially homesickness. If kids are having a hard time, even just leaning on the gate and watching the animals - as one child was doing on a recent Wednesday morning - can have a soothing effect, observed Natalie Knickerbocker, environmental education director. The animals are small enough that they don’t intimidate the campers, she noted.

Research has shown that animals, such as pets like cats and dogs, are valuable to a child’s emotional development. When children are petting, brushing or just talking to the animals, they’re showing compassion, empathy and respect. Pets can also help kids without siblings develop greater empathy, higher self-esteem, and increased participation in social and physical activities, according to the National Center for Health Research. 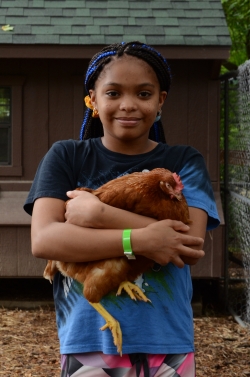 The animals help more reserved kids open up in ways they might not around fellow campers and staff, explained Katie Donahue, assistant summer camp director.

“The campers have to learn how to read, respect and understand the nonverbal cues of these living creatures,” said Donahue, who manages the care of the animals. “It’s a really interesting aspect. It brings a lot of joy to camp. And the kids feel a lot of ownership to the animals as well.”

The farm is accessible to all the campers: they can pet the animals, brush them and even take turns walking the goats. Children in Farm Camp learn how to take care of the animals through feeding them, grooming them, and maintaining a clean home for them. They’re also learning responsibility and the importance of teamwork.

A generous grant from the Marta Heflin Foundation has helped make this small farm a reality. The foundation's director and vice president, Paul Katz, is also a Fairview Lake camp alumnus.

The farm is utilized for educational programs on and off site. Groups can come and learn facts about the animals, while seeing and touching them. For many of the schools that come for day trips, the farm gives the students from urban areas access to animals they would not get otherwise.

Griffin, who grew up in Manhattan, can relate. “People who live in the country take all these other animals just for granted,” she said. “[The farm] has changed the fabric of our camp in a beautiful way.”

Fairview Lake YMCA Camps offers summer day and sleep-away camp experiences that are made possible through the generous support of donors.Visit fairviewlakeymca.org to learn about a variety of camps, environmental education programs, family and group camping opportunities and more. Because the Y is for all, financial assistance is available to qualifying families and individuals who wish to participate in camp.