The constellations Aquila on left and Ursa Major (The Big Dipper) on right.

At Fairview Lake YMCA Camps, we strive everyday to be a place where children and adults from all backgrounds, and from all over the world, can play and grow together.

Throughout the last century, Fairview Lake YMCA Camps, and camps across the U.S., have grown and changed with their communities. In our own history, traditions have come and gone. As our communities moved to become more inclusive of other races, genders and cultures, so did we. In the beginning, Fairview Lake was racially segregated and was also only for boys. These traditions changed when we became a racially integrated camp and when we opened our doors to women. As the needs in our community change, Fairview Lake adapts and changes with the community.

Part of our summer history is centered around an annual event called Color War. This too has seen changes and modifications over the decades. For a number of years, the games were called Army vs Navy and then Mohawk vs Sioux, and, for many years, did not happen at all.

Here at Fairview Lake, we benefit from the pitch black night sky, which provides the perfect backdrop for the stars to shine bright. For many campers, experiencing the night sky and all of its magnificence is something that they might only get to do at camp. Looking up at the night sky, there are two constellations that are at their brightest and best in the summer: The Big Dipper and Aquila constellations. Aquila stands for eagle in Latin, which is where the team name Raptors comes from, and the Big Dipper is part of the Ursa Major constellation known as The Big Bear.

In northwest NJ, two native species are the Black Bear and the Red-Tailed Hawk, natural mascots for teams. We have chosen Ursa for the black team and Raptor for the red team.

Camp is about giving all children the opportunity to shine. At Fairview Lake YMCA Camps, we encourage our campers to try their best at everything they do. The team names embody our fundamental philosophy - that camp should be a place where all kids can be at their best and brightest. 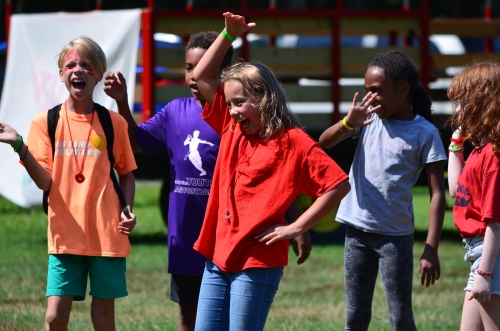 While the names of the teams have changed, the tradition of Color War and what it represents has not. The best parts of Color War have always been the teamwork, competition, fun, sportsmanship, joy, excitement and camaraderie that our campers and staff experience. The goal of Color War is to provide a place for campers and staff to showcase their talents – athletic, musical and intellectual - and to celebrate the individual and team accomplishments that take place for two exciting days.

The support for this change from our campers, staff, Board of Directors, and alumni has been tremendous. We’ve had emails and messages of support from past directors and executive directors, other Y-camps, representatives from Y-USA and so many of our parents. We are proud of our leadership, staff and campers who played a role to change the names and help our camp thrive for decades to come.

The spirit of the Color War has never been stronger. From the sound of the first canon, the excitement has been high and the competition has been fierce. The songs and cheers that keep up the spirit of camp have been amazing, and we’re constantly inspired by the incredible creativity of our campers and staff.

We thank you for your continued support of our programs and our mission.